Average real GDP growth will slow down to 2.3 per cent in 2012 (3.2 per cent in 2011) in CEE; higher growth rates compared to the eurozone in the medium term

The currently very uncertain situation in the eurozone - for which the leading indicators are pointing to a period of recession, while the sovereign debt crisis continues to escalate from one episode to the next -- also has negative ramifications for Central and Eastern Europe, Peter Brezinschek, Head of Raiffeisen Research, a unit of Raiffeisen Bank International AG (RBI) comments. Consequently, Raiffeisen Research has significantly lowered its 2012 growth forecasts for most of the countries in Central and Eastern Europe (CEE) , resulting in a GDP growth estimate of 2.3 per cent for the region as a whole. With regard to the year 2011, Brezinschek anticipates the region's GDP to grow by 3.2 per cent. Even though growth in CEE is slowing down, the rate remains significantly higher than that expected for the eurozone, which is forecast to grow by 1.6 per cent in 2011 and just 0.2 per cent in 2012. Also, the CEE region is expected to continue its catch-up process towards the eurozone with a positive growth differential of 1.5 to 2 percentage points p.a. until 2015.

According to Raiffeisen Research's chief analyst, the impacts on CEE stem both from the region's lopsided export-orientation (up to 85 per cent of CEE total exports go to the EU), as well as the tensions within the European banking sector. However, Brezinschek expects the effects in the CIS region to be less pronounced than in Central Europe (CE) and Austria, due to the more robust domestic demand in the CIS countries. Raiffeisen Research expects the CIS region's GDP to grow by 3.6 per cent in 2011 and by 3 per cent in 2012. Compared to 2011, the CE region's average GDP growth rate should drop by one-half, from 2.9 per cent to 1.4 per cent, Brezinschek forecasts. The real GDP of South Eastern Europe (SEE) should grow by just 1.6 per cent in both 2011 and 2012. Brezinschek anticipates a period of temporary stagnation for Austria, with the country's GDP set to expand by only 0.4 per cent in 2012, due to fading investments and net exports. For 2011, he still expects Austria's GDP to grow by a reasonable 3.0 per cent.

In contrast to 2009, even in the event of Greek debt restructuring accompanied by Draconian consolidation measures and banking system recapitalisation, we do not expect contractions in production on the order of what was seen in the wake of the Lehman bankruptcy, provided that it proves possible to prevent contagion effects by implementing measures that restore confidence on the financial markets, Brezinschek states.

Brezinschek believes that the partially recessionary trends will also dampen inflationary pressure in commodities and energy, with oil prices likely to fall by around 15 per cent in 2012, leading to a mild decline in inflation rates in Austria and CEE. Within the framework of Greek debt restructuring, the ECB will also lower its key interest rates to 1 per cent or lower. This will also have an impact on the central banks in Central Europe, with rate cuts looking likely at least in Poland and rates probably remaining on hold at historically low levels in the Czech Republic. We also believe that the peak in the interest rate cycle in Russia is now behind us, Brezinschek adds.

Freely convertible currencies such as the zloty and the forint are still vulnerable to more depreciation in a weak EUR scenario, with Hungarys political developments serving as an additional source of risk, Brezinschek explains. He expects to see the first signs of a rebound in the second half of 2012, contributing to a strengthening of the main CEE currencies versus the euro in that timeframe.

The stock markets in the CEE countries have also been battered by the global downtrend, with a wide range of declines since the beginning of the year, spanning from minus 8 per cent in Croatia to minus 40 per cent in Ukraine, Brezinschek states and explains that equity markets lack support in light of the persistently bad news on the debt crisis and the economic downturn. Aside from temporary rebounds, he believes that the negative factors will dominate market developments until spring 2012, which points to further declines in prices. We think that the markets will only bottom out once a new beginning has been secured for the eurozones peripheral countries and given fledgling signs of stabilisation in the economy, probably leading to a turnaround in the second half of 2012, Raiffeisen Research's chief analyst adds. Brezinschek's recommendation: Even though valuations look attractive, one should keep in mind that 2012 earnings growth expectations for CEE will also be subject to some degree of downward revision. Consequently, we take a broadly defensive stance in our sectoral positioning. Selected investments in BB-rated corporate bonds in the CIS region such as Alfa Bank and Vimpelcom with yields from 6.4 per cent to 9.4 per cent may represent an alternative for risk-friendly investors.

International developments set the tone for the Austrian equity market

The sovereign debt crisis in the eurozone combined with worries about the state of the economy has had a significant impact on the Austrian equity market. According to Birgit Kuras, Chief Analyst of Raiffeisen Centrobank AG, Austria will just like any other European market continue to be influenced by the Greek crisis and the uncertainties that come along with it.


Recent price declines have pushed valuation components down to lower levels, making the Austrian market appear moderately priced compared to historic multiples. For example, aggregate earnings estimates based on the price/earnings ratio for 2012 have reached 8.5 and the price/book ratio has come down to 0.8. Yet in such an environment, valuations do not matter much in the short term. Although Austrian companies show good fundamental strength, they will not be able to escape the negative market sentiment," Kuras points out. In fact, she expects the ATX to move into negative territory in the medium term, retreating to 1,800 by mid-December and to 1,700 by mid-March 2012.

Despite mainly good quarterly performance, most Austrian companies have taken a cautious stance in response to difficult market conditions, pointing out again lower visibility over the summer months. Verbund explicitly reduced its earnings outlook, expecting the operating result to fall short of last year's figure and results on investments to remain poor. Likewise, Erste Group may be facing difficulties in view of the Hungarian governments approach to deal with the problem of foreign exchange loans.

Overall, the outlook for the period ahead is cautious. Kuras emphasizes the need for a viable, long-term political solution to the sovereign debt crisis as otherwise there will not be any sustained easing on the markets.

Given mounting economic risks and the prevailing market uncertainty about the future of the European debt crisis, our core recommendations are mainly defensive shares at present.

The rationale behind Raiffeisen Centrobanks analysts "buy" recommendation on the Oesterreichische Post is its less cyclical business model, the high net cash position of an estimated EUR 375 million at year-end 2011 and the attractive dividend yield of about 8 per cent. In the opinion of the company research-team, the positive effects of the change in the letter postage system will become even more visible in 3Q11-1Q12 than in 2Q/11 because the change in postage fees only became effective in May.

conwert is currently trading at a discount of more than 40 per cent below its net asset value (NAV). The company is mainly focusing on its core markets Austria and Germany, whereas the other Austrian peers emphasise above all the CEE markets, states Stefan Maxian, Head of Raiffeisen Centrobanks Company Research. German residential real estate stocks, by contrast, are being traded at substantially smaller discounts compared to their respective latest reported NAVs.

According to Maxian, the Polish telecom company TPSA is well braced for uncertain times thanks to its strong balance sheet and because the group is expected to generate positive adjusted cash flow of some PLN 2.4 billion at year-end. In our opinion, TPSA will benefit from the rollout of VDSL and the cooperation with TVN, which should not only attract new broadband customers but also support average revenue per user ARPU in the broadband segment and stem fixed-to-mobile migration, Maxian says.

At the current share price, Polish utility PGE has dismantled a lot of its valuation premium compared to less profitable peer group companies. The sale of Polkomtel is likely to be finished still in 2011, so that PGE gains leeway for reshaping the company further and preparing its fleet for the capacity needs of the future and pay a substantial dividend. Moreover, electricity prices in Poland are less volatile than in other countries.

The Russian basic materials company Polymetal could be seen as a good hedge due to its precious metals exposure (gold and silver). The strong organic growth of Polymetal's gold equivalent production to 1.3 million ounces by 2013 implies an increase in consolidated sales of 26 per cent over the next two years.

Raiffeisen Bank International AG (RBI) regards both Austria, where it is a leading corporate and investment bank, and Central and Eastern Europe (CEE) as its home market. In CEE, RBI operates an extensive network of subsidiary banks, leasing companies and a range of other specialised financial service providers in 17 markets.

RBI is the only Austrian bank with a presence in both the world's financial centres and in Asia, the group's further geographical area of focus.

In total, around 60,000 employees service about 13.5 million customers through around 3,000 business outlets, the great majority of which are located in CEE.

RBI is a fully-consolidated subsidiary of Raiffeisen Zentralbank Österreich AG (RZB). RZB indirectly owns around 78.5 per cent of the common stock, the remainder is in free float. RBI's shares are listed on the Vienna Stock Exchange. RZB is the central institution of the Austrian Raiffeisen Banking Group, the country's largest banking group, and serves as the head office of the entire RZB Group, including RBI.

Raiffeisen Centrobank AG, the Equity House of Raiffeisen Bank International, is a leading Austrian investment bank with a strong focus on the CEE region, offering the entire spectrum of services and products associated with stock, derivatives, and equity capital transactions, including and excluding the stock exchange. Based on this position, the specialized bank also offers exclusive, individual private banking.

For the sixteenth time in a row, Raiffeisen Centrobank was named Austria's best certificate issuer. 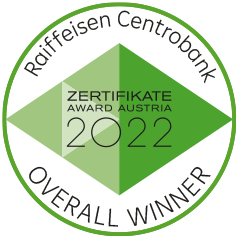