More than 120 institutional investors and almost 70 companies met last week at the traditional investor conference of Raiffeisen Centrobank’s (RCB), which took place for the 15th time this year, in Zürs am Arlberg (Austria). Investors and companies met in 43 group presentations and far more than 1,000 one-on-one meetings and took the opportunity to explore investment possibilities and exchange market information. The companies present at the conference came from Austria, Central and Eastern Europe as well as from Turkey and drew a fairly positive to neutral picture of the current market situation.

“In general, all the group presentations and one-on-one meetings left us with a rather positive impression on the underlying operating performance of the participating companies. Comments regarding the overall economic environment sounded rather encouraging, in our view, and in general the slightly positive dynamics is seen to continue. The statements of the companies did not point to a potential deterioration of the business cycle in general. We especially would like to point to the fact that the company representatives did not give too much weight to the risks that were dominating the financial markets at the beginning of the year - like the Chinese slowdown, the risk of fading US dynamics or the negative impacts from the low crude oil price. There were even individual comments indicating signs of stabilisation in China and Russia”, RCB CEO Wilhelm Celeda points out when describing the atmosphere at the conference.

A poll conducted by RCB on the spot clearly underlines this impression: compared to the previous year, only 2 per cent indicated that the market sentiment is negative (3 per cent in 2015), 37 per cent were overall positive (70 per cent in 2015) and the vast majority of companies rated the market “neutral”.

Sentiment with investors and companies currently “bullish” to “neutral”

Raiffeisen Centrobank AG (RCB) is the competence center for equities and certificates in Austria with a strong regional focus on Central and Eastern Europe. As a full range provider of certificates the bank offers more than 4,000 products for every market situation and investment horizon. The coverage universe of RCB’s Company Research comprises some 130 titles. RCB is a 100 percent subsidiary of Raiffeisen Bank International AG.

For the fifteenth time in a row, Raiffeisen Centrobank was named Austria's best certificate issuer. 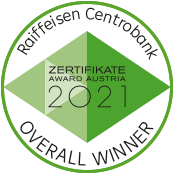